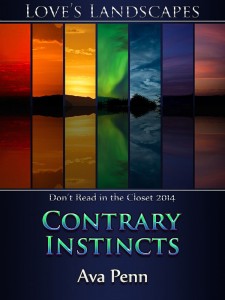 PHOTO DESCRIPTION:A thin, frail young man with short, dark hair curls into the embrace of another man whose chest he is being cradled against. The unconscious man has his left hand placed against his protector’s neck, like he needs an anchor. The man holding him is awake, staring at a point in the distance. His thick curls aren’t long enough to hide the protective expression he wears, emphasized by his hand on the other’s shoulder.

He needs a keeper. Look at him! His hair buzzed to his skull so short I couldn’t run my fingers through his curls anymore. I’d ignored his threat to cut them off after the last time I’d held him still with those soft tendrils. The bones of his face were stark without his hair to hide behind. His hips jutted like knives and his long arms were stick thin. They were surprisingly strong as he curled into my warmth, though.

Somehow he’d gotten away from the family, attempting to live a life different from the one he was born to. He had to know I’d come for him eventually. I found him shivering in the driving rain, too lost in a haze to fight me when I scooped him up.

He always fought me.

See, I knew he loved me, and damn did that piss him off. Because if he loved me, then he’d given in to his instincts… and that was the last thing he’d ever do. But I needed him too much to ever let him go again. Now I just had to convince him to come back home.