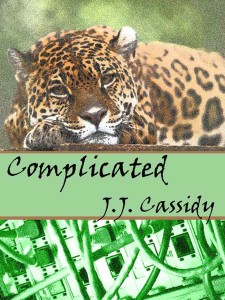 PHOTO DESCRIPTION:
Two men, both with short, dark hair, lie together on a striped sofa or daybed. The one on the bottom, acting as a pillow and a living mattress, embraces the other man with what seems to be easy affection. The man on top sprawls face down, his head tucked into the space between his lover’s neck and shoulder, hiding his face from view.

I don’t actually have any plot pre-reqs. (That’s not to say the plot isn’t important, though. I don’t want something that’s complete PWP or Excuse Plot. I’d like something that has a rather light tone overall, but still has depth and something meaningful to it. Elements of darkness are okay and, in fact, may even be encouraged, as my profile would attest to. I just don’t want it to turn out to be a darkfic.)

I just want adorable cat-shifter-kitty-petting/cuddling. Maybe the shifter retains some cat-like characteristics even when human/in his human form. It doesn’t necessarily have to be a housecat. It could be a big cat of some sort. Just, you know, with petting and cuddling and adorableness (in human and cat forms if you can fit it). And maybe some playing with the tail (not tail sex. just playing with the tail).

If you want to include an anthropomorphic/half-and-half form or something visually similar to the Loveless (kind of) cat-people of some sorts (the latter would actually be preferable), that would be okay too ^^