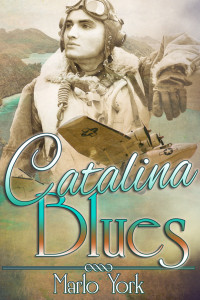 PHOTO DESCRIPTION:
A black and white photograph of a dripping-wet, naked gunner standing in a flying boat’s cupola, manning his machine gun. His long crew cut hangs in his face, his headphones protect his ears, and he stares out against his enemy with concentration. Behind him on a small bit of wall is a poster showing silhouettes of Japanese warships. Photographed by Horace Bristol, 1944.

“This young crewman of a US Navy “Dumbo” PBY rescue mission has just jumped into the water of Rabaul Harbor to rescue a badly burned Marine pilot who was shot down while bombing the Japanese-held fortress of Rabaul. Since Japanese coastal defense guns were firing at the plane while it was in the water during take-off, this brave young man, after rescuing the pilot, manned his position as machine gunner without taking time to put on his clothes. A hero photographed right after he’d completed his heroic act. Naked.”

That is the caption and the story behind the picture taken in 1944 and I figured that alone could make for a really good prompt for Love is an Open Road. I’m being cliché but wouldn’t it be nice to imagine that the naked gunner and the marine pilot; you fill in the blank.

Acknowledgments
Thanks are owed to the wonderful readers and authors of the MMRG for reading this rough piece of work: Eric, Gwynn, Kaje, and Samantha. A heartfelt thank you to the editors, proofreaders, and Raevyn who kept everything together. A tip of the hat to Alex for transforming a few sentences into a spectacular cover. I’ve blown a kiss across the ocean to Kinga for answering last minute questions about Polish grammar. All mistakes found herein are my own. And finally, much gratitude to Keah for inspiring this story; I’m sending this along with my fervent hope that she enjoys it. Thank you for reading.