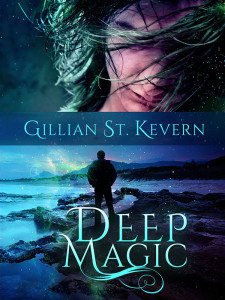 PHOTO DESCRIPTION:
A man sits alone in the long grass atop a cliff. His head is bowed, and he is oblivious to the beauty of the sunset behind him. The gold, orange, and red of the sunset fade into the calm waves of the sea beyond him. Superimposed over this are two men, one gazing intently at his laughing companion, a memory of lost happiness.

So strange to be back. Nothing’s changed. The same soft gold of the September sun against my face, the crash of waves against the sheer cliff face of the Welsh coast below my feet. Even my grandmother’s cottage, with the only half-tamed garden, is exactly the same. The only difference is she’s not there, not anymore. I’m alone in my memories of her… and of the mysterious boy I once met in the smuggler’s cave on the shore.

I told her of him, back then, of how he was a merman prince and I the knight of the garden gnomes. When I told her that she was the witch queen watching over the fragile peace between the spirits of the sea and the garden, she waved her spoon as though she was really one.

She was always like that, very accepting of me. Even when I came out to her, she never batted an eye, but said she loved me.

Every summer of my childhood was like that, until I moved to Australia. I never went back. Until I received the terrible news of my grandmother’s death, that is. Now I stand here, where I once did, waiting…

He is waiting as well? Or was he only a dream?

Sometimes I still see the twinkle in his eyes…

Acknowledgements
I cannot thank Achim enough for this prompt. Deep Magic was incredibly fun to write, and whenever I needed support, Achim was there to share his enthusiasm for the snippets I posted to the group discussion thread or to encourage me to trust my instincts and go with the story. Deep Magic would not have been possible without you, Achim, in more ways than the obvious.

I also owe a deep debt of thanks to Arielle, who was an amazing resource of Welsh knowledge and all-round common sense throughout the entire story. If I have succeeded in capturing the feeling Aberdaron and its surroundings at all, it is entirely due to Arielle. I’d also like to thank the talented Bree Archer for taking my ridiculous cover request in stride and then turning out something as beautiful as the cover she did!

My friend Julia kept me on the plot, while you have beta-readers Serena, Zenia, Kamilah and Faith to thank for this being at all legible. Raevyn caught more errors than I had believed humanly possible, and I’d like to thank the formatting and proofreading teams in advance for their help! You all do an amazing job.