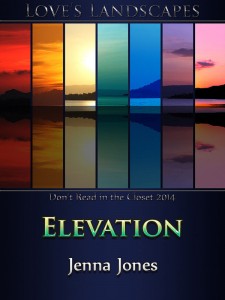 PHOTO DESCRIPTION:A series of animated .gifs where a handsome, bearded man strips off his clothes in an elevator. At the end of the series, he laughs.

When I needed a better job to make ends meet when my (parent) fell ill, my uncle stepped in. He’s one of the maintenance men in this massive building downtown. It has offices in the first ten floors and apartments above. They needed someone to fill in for the maternity leave of one of the “night portiers” as they call the position and I got the job, for now. It’s actually a glorified way of saying “you get to stare at screens all night and sit in the middle of a lobby that’s bigger than your house.”

That’s okay, it’s easy money. Or was, until this one guy showed up. He’s one of the people who get to use the special elevator in the back corner. That leads to the top two floors only. Where the city’s richest people live.

I’ve no clue where he was, maybe abroad or in rehab or whatever, but since he came back, he’s been hitting on me nonstop. It’s been going on for months, now. Every night I’m on shift. He’s getting frustrated, sure, but I didn’t expect THIS! What the hell is he doing? Doesn’t he know WHO ELSE needs to use the elevator and might walk into the building at any momen while he surfs up and down, doing this… THING! (I refuse to call that striptease, the elevator doesn’t even have music…)

He’s hot, but we’re from two very different worlds, and a guy like that is no good for a guy like me.