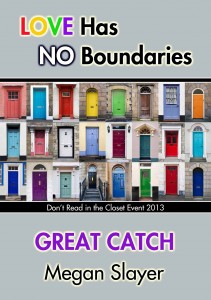 PHOTO DESCRIPTION:
Two young men are side by side on a bus and appear to be sleeping. The boy on the left wears a sleeveless dark blue T-shirt and a grey visor turned backwards. He has his arm around the boy on the right, who rests his head against his friend’s chest, cushioned by a towel or pillow. Their fingers are laced together, holding on as they sleep.

He has always been such a fun and outgoing guy, doing anything for a laugh and never caring about what anybody thinks. Believe it or not, I used to actually be shy before we met, but now I’m almost as outgoing as him. He brings it out in me, I guess. I never thought I’d be good at baseball, but after having played catcher for him so many times in his backyard, I decided to try out for our high school varsity team after he made starting pitcher. (And ha-ha, yes we have heard just about all the pitcher/catcher jokes we can stand.) But like I said, he doesn’t care what anybody thinks and we always have a good time together, even when we have to take the boring bus to and from our games.

And like I said, I know that we just fool around to get off and have fun, and it’s not like we do it every day. Except lately it seems that when we are together, even when we are just hanging out, I can’t help but get the feeling that he is looking at me differently than he normally does… Like he is waiting for me to say something or do something. But it’s driving me crazy, because I know I want more. But I know he doesn’t… Does he?