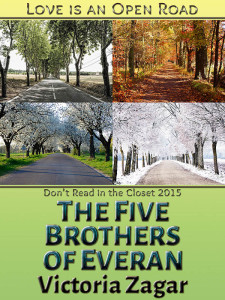 PHOTO DESCRIPTION:
A mage with long black hair stands holding a book. He wears dark robes and a green cloak, along with a belt and a jade sash. He appears thoughtful and determined, as if pondering a greater fate. His hand is clutched around the book, as though he is perfectly capable of unleashing its power at any moment.

This handsome prince is me, one of five brothers. We were all adopted at the age of two after the council objected to their king marrying another man. Father sometimes says they might have overdone it with so many, but he’d been really invested in sticking it to the councilmen. We’re a bit of a grab-bag set, but we’re as close as if we’d been brothers in blood, and I wouldn’t give any of them up for the world.

But that’s old news. The current scandal is that my fathers have said that they will officially announce their heir at the Summer Festival. The council has been pushing for it, but for my part I wouldn’t mind waiting another decade or two. I don’t think I even want to be king, but I’ve been caught up with my brothers in competing and posturing― I swear we’re worse than an ostentation of peacocks. Between that, the outside pressure, and the usual chaos that accompanies the Summer Festival, I barely have time to think, let alone cause trouble. Which is why it’s such a terrible time for me to realize I have feelings for one of my brothers. Not that any time would really be good for that, but this is particularly awful.

So basically, my life’s a mess, and I really need someone to help walk me through it to the happy ending.

Acknowledgements
Special thanks go out to Jaime for the wonderful editing, and to everyone who proofread and otherwise contributed to polishing this rough diamond into a finished story.