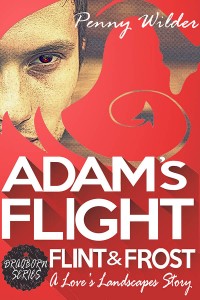 PHOTO DESCRIPTION:
A beautiful man with long flame-red hair and burning eyes stares ahead. His gaze is determined, deliberate, and his eyes are glowing as if lit by a fire within. He is magic, powerful. In the background, we see his other form, a red fire dragon illuminated against a sky on fire.

It was the loud sound of ancient bolts sliding free from their even more ancient locks that awakened Adam; then again, it also could have been the unbearable pain slicing through the back of his skull that had caused him to finally push through the fuzzy barrier that was unconsciousness. The dim lighting coming from one lone torch on the wall near his head was the only thing that kept his prison from being plummeted into full darkness, he heard low fierce voices coming from behind the large cracked oak door that opened the way to a freedom he’d probably never see again.

Once again there was the clicking sound of an ancient lock releasing from its mechanism, and then the door opened and with it came a creaking noise that suggested that the hinges had gone on far too long without a proper oiling and the awful sound also succeeded in making his head pound unmercifully. As the sound of the door echoed off into the blackness of his prison a short stout man that could’ve been a relative to an ogre stepped into the room dragging behind him a raggedy looking stool that surely would’ve collapsed under the cruel weight of this man.

However, as quickly as the man had entered was how quickly he’d left, as soon as the stool was properly placed. A short time later though, another man entered and once again he doubted the ability of the stool to hold this man’s weight. This man was far more attractive with dark hair that might’ve trailed behind him if it hadn’t been for the tiny leather band holding it back into a ponytail, his bright blue eyes almost pierced the darkness and took he took his seat with a gracefulness that surprised Adam. Still, his masculine beauty couldn’t hide the cruelty rolling off him in waves of black.

The man snapped his fingers and then another ogre-like man rushed into the room with another burning torch which he promptly placed in the other holder by the door. The taller man, who probably beat Adam’s own height by just a few inches, then spoke in a voice that under normal circumstances would’ve made Adam’s cock stand up and take notice in no time flat, but right now all that voice did was make him cringe.

“That’s much better. We couldn’t possibly have a proper conversation without more light. I always like being able to see my prey as well as seeing the fear I invoke in them.”

That’s one thing he wasn’t going to see from Adam. His rage temporarily drove away the pain from his headache, and he could almost feel the man’s throat in his hands; and he might have if it hadn’t been for the damnable chains attached to his wrists. The man only laughed in that mocking way Adam despised hearing from anyone.

“Just tell me where she is, and then I’ll be more than happy to let you go. Maybe after you cooperate we can get to know each other better.”

Adam wasn’t sure what made him sicker; the look he received from the man or the way he smiled when his eyes hovered longer than was necessary on Adam’s crotch, but Adam swore to himself that he would bear anything he had to in order to keep Ellianna safe. Anything to make sure she married the man she wanted, even if that man was a dragon.

The man’s shocking eyes narrowed at his silence and then he rose from his seat. Adam tried to brace himself for what he was sure was coming, but the shocking pain of the man’s booted foot colliding with his bare stomach couldn’t have been avoided even if he’d been able to read the man’s thoughts. His attempt at breathing through the pain failed and when he could finally lift his head, the man was directly in his sight, anger pouring off him.

Adam didn’t get a chance to respond because some commotion outside drew both of their attention to the door. Then screams and the sound of what might have been an explosion echoed throughout all of the dungeon. The man left Adam with a parting punch to his jaw that he knew would leave at least an ugly bruise.

After he was gone, Adam fought to hang on to consciousness, and if it hadn’t been for the rumbling and subsequent explosions he might have succumbed to the darkness awaiting him. But the sound of crumbling stone and more screaming had him staring at the far left corner of his prison. He could hardly believe his eyes as that entire sector began to shake and crash around him. He waited expectantly to be crushed under at least one hundred tons of stone but nothing happened, and when he looked toward what was left of that part of the dungeon, he noticed some sort of barrier protecting him.

The sound of his name being called attracted his attention to the sky, which he could now see clearly through the large hole. It was his sister. She was on the back of an enormous ocean-blue dragon, but the wonderful sight of his beloved sister safe, and it seemed to him having the time of her life, just couldn’t compare to the magnificent sight that was moving towards him.

The incredibly handsome man moving towards him seemed to resemble the dragon in the sky except for his color, and the fact that he was wonderfully human. His deep-red hair seem to shine in the light of the setting sun, but his hair wasn’t only red as it seemed to spark and dance between several shades; from rose, to ember, and shades he couldn’t even seem to put a name to. He looked like some magnificent god the way he rose up from the clouds of dust. When he at last stood before Adam, he noticed that even his clothing was a deep rich red.

The man reached to his side, pulled his sword free from its sheath and let it rise to just above Adam’s head. Adam closed his eyes, even though that was the last thing he wanted to do, because if he had to die at this man’s hand then all he wanted to do was remember the way he looked right now. He felt the rush of the wind as the stranger’s blade was released to do as it wished. Adam knew that he flinched but then he could still feel his head attached to his shoulders.

He opened his eyes and saw that the stranger was closer to him now. Adam had thought that everything else about this man had been magnificent, but he’d yet to see his eyes that he knew what the best thing about this man was…his gorgeous eyes were an incredible mixture of fiery red and melted gold, with little to no emotion reflected within. Adam was so awestruck that he hadn’t even heard the man speak until he spoke again, louder this time.

“We don’t have time for this. If you want to keep breathing then you’ll stop staring at me and move.”

Adam shook his head to rid it of the idiotic thoughts that were drifting through his head but he instantly regretted the action because his head began to throb again. The man turned to him and proceeded to pull him up by one arm but that motion only made his headache worse. He tried to follow but that’s when his legs came out from under him. The man was there in his sight again, only this time kneeling in front of him yet somehow holding him up. He was saying something, asking a question maybe, but Adam couldn’t understand him. He could barely make out his face anymore but something in the stranger’s eyes troubled him. The man almost looked concerned.

The stranger’s incredible eyes were the last thing Adam saw before he blacked out.

Please give Adam and his incredible dragon a terrific fantasy story, thank you so much!