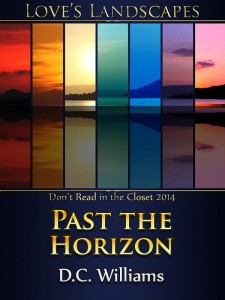 PHOTO DESCRIPTION: Two very young men in WWII era uniforms stand in a field, gazing at each other with their hands clasped. I’m always aware that prior to about 1950, men were much less self-conscious about that kind of pose than became the norm later, but there’s something about this photo, the absorbed way they look into each other’s eyes and smile shyly, that makes it hard to believe they are not in love. The second photo is of two older men, obviously affectionate with each other, sitting at a table or a counter among what looks like the aftermath of a really good party.I initially assumed that the two men were Army Air Corps, and that they were enlisted, not officers, and that they were flight crew. Two out of three, right. It was actually very difficult to get the uniforms identified, but it turns out they are Luftwaffe. That’s a very different story from the one that popped into my head and that Kat’s excellent prompt inspired. Maybe I’ll write that one someday, but this one is about Buck and Joe.

See the photos here
STORY LETTER: Dear Author,Meeting him was one of the best and worst things happening to me… why? Well, the best, because I met him and he was him… the worst, because our fate was more than uncertain, we didn’t know what would and could happen next, where would we end up and would we survive? It made us desperate and I always knew losing him was a distinct possibility and although I’ve only known him a very short time I knew it would gut me.

The funny thing was that I didn’t really like him in the beginning; he was one of those funny guys, always grinning, always in a good mood and a total morning person which annoyed me no end. But underneath all that there was a decent guy, a loyal friend and a strong man. I was drawn to him like to no other… I was afraid he would send me away or laugh at me or worse, tell the others or beat me up should he ever learn about my feelings for him… but in the end he was so tender, so understanding of all my insecurities and fears and I loved him even more. He was the center of my world and would always be even if I should never see him again after this war. We got separated in the end and what we had together it was over way too soon, our time together was so short.

I came home changed, not broken but a different man. It was hard to go on with life but I knew he would have wanted me to try and so I did. I found a job, had a small apartment and lived… at first minute to minute, then day to day… for him I lived and tried to be the good man he always said he knew I was. I didn’t know where he was, there was nobody I could ask, but one day, out of the blue, his sister contacted me. She had tried to find me, she only had that one photo of us and my name, but it’s a fairly common name and I was hard to find. But she’s like him in that sense, never give up, always fighting and going on and so she found me. She knew of him and me, what we meant to each other, I was shocked he had told her but when I got to know her better, I learned that she loved her younger brother and supported us. She didn’t know where he was either… he was MIA… but that’s not dead, right. So it’s not silly or unrealistic of me to still have hope? It wasn’t easy to keep on hoping, not to lose faith and believe I’d see him again one day. In the dark of the night I often lay awake and worried with our fate, cried hot tears about the unfairness of it all, I missed him terribly, even his perkiness in the mornings… but in the end hope won out… and I was right never to give up.

Dear author, can you work with that?? I don’t like cheating, bitchy females or post-apocalypse but a strong, supporting female character that would be fab!! And I’m a hopeless romantic so a HEA would be perfect. 🙂

Thank you!KatSTORY INFO:
Genre: historicalTags: World War II, Battle of Britain, sweet/no sex, family life, whole life through, historical, B-52, bomber crewWord Count: 7,126Author’s NoteWhen writing historical works I’m always conscious of the line by L.P. Hartley “The past is a foreign country: they do things differently there.” America was a very different place seventy years ago. I try to reflect that in my work and as a result, my characters do and say things that moderns wouldn’t. This probably doesn’t cover everything, but WWII servicemen freely used phrases like Kraut and Jap. “Negro” was a polite term for African-Americans in 1947. Pregnant women weren’t advised to avoid alcohol until the early 1980’s. “Monkey Ward” is an old nickname for Montgomery Ward, and has no racial connotations that I’m aware of. And Monmouth County was “South” Jersey when I was a child.