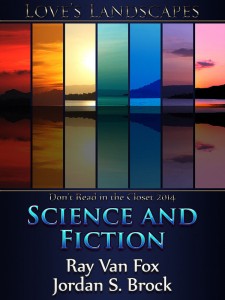 PHOTO DESCRIPTION:
A nude young man lies in a pile of gold leaves in a wooded park. His black hair is streaked with silver. A black tribal tattoo covers his right arm; stars are tattooed along his right side and back.

He loved walking in this secluded area of the park, for some odd reason people tended to stay away from it. Nearing the usual path he took into the woods, his eye was caught by a pile of golden leaves ruffling in the crisp, spring breeze. Where would autumn leaves come from at this time of year? As he crept closer to the pile Jake let out a muffled laugh, his curiosity was going to get him in trouble someday, he was sure of it. He came to an abrupt halt and his eyes widened in surprise at the attractive, naked, young man, dark hair streaked with white, shivering amongst the leaves. Tattoos covered his arm and torso, tattoos that seemed to…

Shaking his head Jake looked around; maybe he was intruding in the middle of a photo shoot or movie, but saw no one. Edging closer Jake saw the young man was awake, his expression one of shock.

“Are you all right? Do you need help?” The young man’s hazel-green eyes searched Jake’s face trying to focus. Not getting an answer Jake asked, “What’s your name?”

Opening and closing his mouth a couple times, the young man finally answered in an odd accent, “I… don’t know.”

Frowning, Jake reached into his jacket pocket and removed his phone, then draped the jacket over the young man. He should really call the police, but his instincts told him that somehow they wouldn’t be able to help and he always trusted his gut feelings. “Come on, let’s get you to my place and figure out what to do.”

I was thinking that the young man hasn’t come into his complete powers yet and he can only do that when he finds his ‘other’. Not mate so much, as ‘key’. They are a partnership, functioning at their best together, but diminished if separate. I like the idea of him being sent to our world by a mentor or family member in order to save him from what was happening in his world or on his planet. Please don’t kill off all the young man’s family. I really dislike stories that base the plot on having both parents or all of the family killed off, it’s so cliché. However, going on the run, into hiding, taken prisoners are all okay. I like the man who finds him to be intelligent but sceptical and always curious. He’s a bit too careful at times but his curiosity often gets the better of him. He’s a dichotomy. At the same time he has always had an ability that resonates or is tied with whatever ability you give to the young man. Of course you don’t have to use all these ideas, but amnesia and the elements and/or magic /or powers/or something unique are definitely wanted.

I’d like this to be a Fantasy or Paranormal, Sci-Fi is okay too. A parallel or hidden world within ours or from another planet works. No Faes or Elves, I don’t care for them all that much and no Vampires or Zombies. Shifters are okay and almost any other paranormal type. No horror. Third person and HEA required. Angst and UST are very okay. Explicit sex is also very good. Switching POVs is okay, but please not every other paragraph. I really dislike quickly changing POVs. I love older/younger men relationships and would prefer the ‘human’ to be around seven to ten years older. No instant love, but immediate attraction and desire is okay. I also love character development. I’d like difficult complications (not simple misunderstandings) and angst that needs to be overcome and then leads to the HEA. If you plan on writing a continuing story after the event, I’d be satisfied with a HFN as long as the sequel was HEA. And finally, I love long stories, so that’s a definite plus.