PHOTO DESCRIPTION: Two men in a private moment embracing, both are bare above the waist. One stands with his back to the audience and the other with his face buried in the first’s shoulder. See the photo here STORY LETTER: Dear Author, The King is Dead. Long Live the King. This is the only private moment he is going to… Read more »

PHOTO DESCRIPTION: The first photo, in sepia tone, depicts a well-dressed man of a past era holding an open book in one hand and his own sizeable erection through his suit pants with the other, revealing himself to be a player, flirting with the camera. The second photo shows a young man in chauffeur’s suit leaning on a vintage car… Read more »

PHOTO DESCRIPTION: A well-muscled young man lying face down on pristine white sheets. He’s nude but the angle of the picture uses his body position to cover him. His fists are stacked on top of each other and his chin is resting there as he stares challengingly into the camera. See the photo here (NSFW) STORY LETTER: Dear Author, He… Read more »

PHOTO DESCRIPTION: In the series of GIFs, we see a man from his shoulders down, shirtless, clad only in a pair of sinful denim jeans and moving in a way that makes you think warm and happy thoughts (it’s getting hot in here, whoo!). The still picture, on the other hand, depicts a naked man crouched on the ground, his… Read more »

PHOTO DESCRIPTION: A naked man rises from a tank of glowing blue liquid. Ports line his neck and ribs with cords extending from them, plugged into something unseen (and out of the picture). His skin is embedded with glowing circuits, and his shaved head bows forward. Mist floats around him as electric currents or lightning strikes illuminate the background. See… Read more »

PHOTO DESCRIPTION: A man with bionic mechanical arms sits in a dusky room holding a cigarette between his robotic fingers. A shot glass with amber liquid in his right hand. Faded scars and wounds cover his collar bone and abdomen; he stares at nothing, obviously bored with the world he lives in. See the photo here STORY LETTER: Dear Author,… Read more » 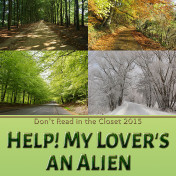