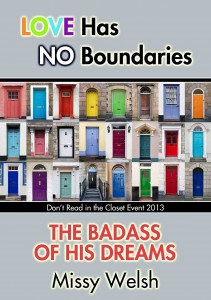 PHOTO DESCRIPTION:
Two young men are naked on a bed in this black and white photograph. One sits up, his head thrown back to offer his tongue to the other. The other man kneels close against the first with his head tipped down and his mouth open; he appears to be a second away from kissing his lover.

It was the middle of sophomore year when he transferred into my elite college preparatory academy. Right away it was clear that he wasn’t there by choice, and he wasn’t there to make friends. Not to be cliché, but if you looked up ‘bad boy’ in the dictionary, there he would be. He had a chip on his shoulder the size of Kansas and he came from the wrong side of the tracks, and none of the rich kids there let him forget it. The guys hated him; the girls either lusted after him or sneered at his scuffed-up combat boots, messy hair, and the multitude of chains and rings and bracelets he wore in flagrant disregard of the academy’s dress code.

Now it’s the beginning of our freshman year of college and once again, we’re at the same school. Even though I wanted him from the moment I first saw him, we’ve never really spoken. I might as well have been invisible for the attention he paid me, both then and now. That is, until a group outing to the city goes badly and leaves me alone on the wrong side of town. I was easy pickings for the guys who spotted me and saw a rich teenager out of his element. I’m not sure what the guys would have done to me if he hadn’t shown up, but that night I discovered more than one secret. He wasn’t just some regular boy with an excessive amount of bad attitude— he was a wolf, and I was his mate, and now that he had finally acknowledged me, there was no way we could live apart without sentencing him to death.