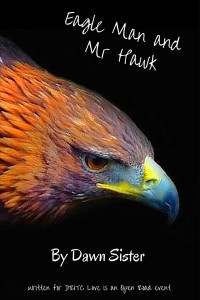 PHOTO DESCRIPTION:
An exquisitely chiselled, muscular man with short cropped, dark hair and wearing only a pair of well fitting, camouflage patterned briefs, stands in open countryside. On his arm is a magnificent golden eagle. He releases the eagle with the confidence of one who has done this a thousand times before. The creature flies from his arm in a flourish.

I have never been good at first impressions. This fact has not been much of a problem until the neighboring farm house was purchased by a beautiful, bookish man and all of a sudden I found myself with someone I wanted to impress.

The first time he wandered from his house to mine he found me in a terribly unflattering padded suit, being attacked by a German Shepherd, and today he stumbled across me half naked while training Rupert, a hawk needed for a new adventure film, with either a dislike of me, or of my clothing. It wasn’t my most shining moment.

See, I train animals for use in movies and commercials, and while I am good at my job, this lovely man seems to just think I am a lunatic. And unlike everyone else I have ever met, I can’t change his mind by impressing him with my credentials. He thinks movies and television will be the downfall of society. But still, everything about him draws me to him, even has he wants nothing more than to push me away.

While not a requirement, I would love-love-love this to be taken by a new author. Maybe someone who has been flirting with the idea of sharing in the fun and no longer writing in the closet. I would love the story to have some comedy elements, but also a little depth. Sex is not required but I would hope for at least a first kiss. I’m open to any POV and just want you to have fun.

Acknowledgements
For the beautiful prompt, that I absolutely fell in love with, I thank Amy. Your Eagle Man called to me, and I knew I had to write his story.

For support and help throughout, I thank Suki. You are the best, you know?

For background support and putting up with my vagueness as I write in my head, on napkins, in notebooks, on my tablet and on my laptop, I thank my long suffering husband, Phil. He is a gem, and he helped me design the cover for this story. I love that he is named as the cover designer. I love that he grouches about my writing obsession but then shouts from the rooftops that he is married to a writer (sometimes in the same breath).

I thank all the volunteers that give their time for this event. I have loved being a part of this for the second year running. It’s been great.

Last, but by no means least, I thank Raevyn for once again trawling through my atrocious punctuation. It was better this time around, wasn’t it? Yes?