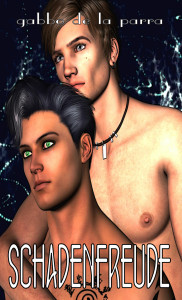 PHOTO DESCRIPTION:
In a semi-dark, narrow flight of stairs two young men are about to show how much they like each other. One is already shirtless and the other is in the process of losing his top while his upward stretched arms cover both their faces. What we could actually see is that both have dark, pretty hair and hairless, twink bodies.

In the photo are two young scrappy men making out in a dingy stairwell.

I would like to have a real bad boy be one of the characters. Perhaps a bit of a criminal, perhaps something like a thief or a dealer of something illicit, or some crime that is more otherworldly or futuristic. Not a sex worker or child abuse in the story, please. I would also prefer a place and time where being gay is a not a stigma. It can definitely be futuristic, a space station, or dystopian world, or urban fantasy etc. Whatever realm it’s in, I like a bit of decay, perhaps corrupted and weakened governments.

The other man can be more innocent, and perhaps there is tension around the corrupting influence of the bad boy, as he might be from other side of tracks? I would like both of them to be flawed and perhaps not totally redeemable― bad habits? ―I would like the tension to be on the psychological side, and no excessive violence.

A HFN ending is great. Please tweak or delete any elements above that do not work for you!