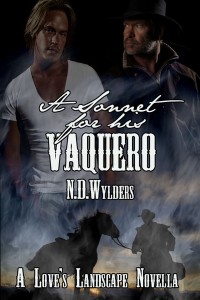 PHOTO DESCRIPTION:A shirtless cowboy with a bale of hay on his shoulder. Medium build and looks like he’s bit sweaty from his work.

A cowboy poet in modern times:

This old wattle & daub house! Think what stories it is releasing as it dissolves and decays in its journey back to the earth it came from. The deepest memories might be the earliest, since they were embedded while the house was young and impressionable. Perhaps the most recent events were so strong as to permeate everything from the clay and straw plaster down to its hardwood core. In a few protected spots the blue whitewash still shows the hand-patterned trim, inspired by the love and pride of its residents. How many were there? How many lives and how many eras does it remember? The lines of public record name the owners and the amount of time each had to care for this house and the land around it. To know their stories is to read between the lines of the records and read the scripts of texture left in the whitewash, in the clay and straw and in the wooden bones of this two room haven:

Alex was raised by a sage, slightly sad, single woman, as she made a go of it on her prairie ranch. He easily learned his academics at school, as well as the music lessons his Mama insisted on. He was naturally articulate, and yet able to converse colloquially enough to fit in with his 4H and hockey buddies, or so he thought. Perhaps they didn’t quite believe him.

His father led a solitary life on a quarter section of land on the distant side of the county. His small cabin (see photo) was perched on a hill, windows & doors facing south like any sensibly built, Ukrainian home. Alex’s Great (and single) Uncle Oleksa, on his Mama’s side, built that cabin the first summer he and his brothers homesteaded on this rolling prairie, back in 1910. However, he knew little of either Great Uncle or father, his mother being very circumspect on family gossip and his place in it. Alex had been to his father’s cabin a few times and then only when he was quite young.

Alex went off to university and completed a couple of degrees in agriculture with a side in music (is that even possible!?). While there he realizes his homosexual nature but only scratches it, like an itch, when it distracts him from his studies.

Alex returns home in a funk after his masters is complete to contemplate his future, when both his Mama and father’s health start to fail. His Mom rented her ranch out and moved to town a year or so ago, but his father spent his last mid-spring days on the land he loved. Alex inherits his father’s homestead complete with farm dog and horses. When he moves in to his the tiny, well designed, and surprisingly orderly but ancient cabin he discovers a box of letters that show his inconvenient sexual orientation seems to have run in both sides of the family, for at least two generations. He also realizes that neither his father nor his Great Uncle Oleksa were solitary men for much of their lives.

As usual, Alex is playing his guitar, & singing lonesome, country, blues on the porch, in the setting summer sun when a man a several years his senior bicycles into the small farm yard. Alex remembers noticing him around town back when he was in high school. Now he’s looking for a job that will put him back in the saddle, or at least on some farm implement. What brought that potential hired hand (pronounced “hard” hand of course), to Alex on this of all evenings! Was it fate? Was it the sunset, his music and current emotional vulnerability? Or did the entire community conspire to set up this life changing connection to keep them both in their lives.

I know this is a fairly long prompt, so I’m open to interpretations that change the above prequel. I enjoy HEA stories where relationship building and romance are primary. It doesn’t matter when the sex kicks in, but I find that frequent and long descriptions of sex get boring. Of course we know most men fall in love with those they find attractive rather than vice versa so I’d like some sex in there. Also, I’m partial to mature men, but feel free to adjust the timelines if it works better. I’m curious how you would deal with the power differential between an older hired man and a younger man with relatively more money and power but less experience.

My inspirations for this prompt were several and include the attached photo of a disintegrating cabin, and the tune (not the lyrics) from Oceanman, by www.BlakeBerglund.com. The music is my perfect sunset song. Feel free to let yourself wax poetic as well as prosaic. Let your inner cowboy poet come out if you like. You might include Dada’s &/or Uncle Oleksa’s story in flashbacks or as ghosts if you like.