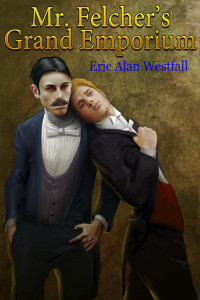 PHOTO DESCRIPTION:
Ah. Hmmm. Let’s put it this way. The photo is a composite of six actual nineteenth-century photos, each showing two men enjoying themselves in most deliciously flagrante delicto manner: a supporting chair, a numbered pair, a doggy’s pride, a horseman’s ride, a side slide so fair, a leg in the air. More specific? Well, then: fucking over a chair, 69, dog-style fucking, straddle fucking, side fucking, leg in the air fucking. Specific enough?

When I received the following letter from my dearest friend, Lord Fotherby, I was rather intrigued:

I would be most honoured to receive the pleasure of your company at Mr. Felcher’s Photographic Emporium on the 5th day of this month, 1882. This grand fellow specialises in ‘Gentlemanly portraiture’ in the relaxed surroundings of his London studio and has come highly recommended by my intrepid manservant, who has most diligently assessed Mr. Felcher’s credentials at my request.

He reports that the gentleman is extremely thorough in his attention to detail and in the pursuit of a most pleasurable outcome for all of his photographic clients. Using only the most up-to-date technology, he captures images of gentlemen engaging in the most gentlemanly of gentlemanly pursuits.

I would love for Lord Smythe and Lord Fotherby to be deeply and passionately in love with each other, but oblivious to their feelings due to their total sexual repression. A couple of clueless virgins awakened to the pleasures of man-on-man action would be great. And lots of explicit sex, using old-fashioned language i.e. members, seed etc. Oh, and no need for great attention to detail with regards to historical accuracy as long as it has a Victorian feel to it. But straight up historical please (not steampunk, fantasy, paranormal etc.)

A Hearty Round of Cyber-Applause to:

A Special Thanks to Roberto Quintero and S.J. Eller
Most of the time, when you are thanking an artist for creating an original painting for your book, you are thanking him or her taking your description of your character(s) and making him/them “come alive” in the painting.

Roberto did that for Emporium with style and brilliance.

He did something else that I think is far more important.

He put Reggie (mustache) and Harry (red hair) in a pose I never would have thought of, but which captured their spirits perfectly. And in doing so, he inspired me to write one of the pivotal scenes in their journey to happily ever after. Perhaps, even, the most important scene in the book.

It’s a moment that I couldn’t possibly have come up with on my own, and thanks to Roberto, this book is far, far better than it would otherwise have been.

I am extraordinarily lucky to have found such an amazing artist to help me.

I was equally lucky to have found font-finder extraordinaire: S.J. Eller. Her choice was not too big, not too small, but just right in every way.

An Equally Special and Profoundly Grateful Thanks To Danni
The composite photo she provided is made up of six actual vintage photographs that I’d seen before. Several times.

Yet I’m absolutely certain this novel would never have existed without the brilliance of Danni’s prompt. She gave me the book title almost instantly; she gave me the concept shortly after (six photos, six visits), she gave me remarkable heroes who named themselves, just as she gave me the letter that started everything off between Harry and Reggie. Without that combination, I could never have put it together.

Beta Readers (Without Whom Nothing Good Would Ever Get Done):
In alphabetical order: Anna, Kezia and Rebecca.

But please remember, if I did not adopt their suggestions, as with other authors, “The fault, dear readers, is not in our betas, but in ourselves…”

The Penultimate Thanks! to:
Raevyn, one of the moderators who doesn’t really care all that much for historicals, but who took on the daunting task of editing all those words. Commas in, commas out, em dashes here, ellipses there, why did you say this when a hundred pages earlier you said thus-and-so, and most important of all, the dreaded: CMOS doesn’t permit that!

Thanks for your patience with my delays, your understanding, and the brilliance of your help.

And though they’re used to being last on the list, perhaps, they’re far, far from least:
The moderators, editors, formatters, proofreaders, and all those whose functions I don’t know, without whose superb volunteer efforts “Don’t Read in the Closet” would never have been born, and never have lasted so long and so well. Thanks for helping to inflict me on the MM romance world (though the world may never forgive you). Mercy buckets!