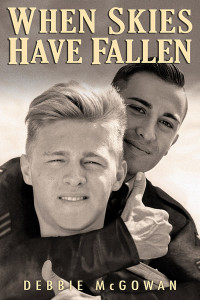 PHOTO DESCRIPTION:
Picture is of two young soldiers at the front of a WWII armed forces jeep. Both men are dressed in fatigues. One is sitting on the hood of the jeep; the other is standing and is kissing the seated soldier’s cheek, whilst embracing him around the shoulders. Both men have cheeky, happy smiles.

Life isn’t a fairytale. These two know that better than most. These men are survivors. Against all odds, they made it through hardships, separation, and war. They clung to hope where little existed and, as the skies fell around them and the world was torn apart, found strength in loving each other.

Suddenly, the war was over. Battlefields lay silent and troops prepared for the journey home. These two were more than ready. They had experienced enough loss, grief, and pain to last ten lifetimes. The country they left behind may not have been ready to accept them, but they were prepared to live no matter how many skies had fallen.

You can tell me the story of how these men met, but what I really want to know is what happened to these men after this photo was taken. Did their love endure the trials of a return to civilian life? Were they able to overcome the trauma of war and find peace together?

Acknowledgements
With heartfelt thanks to:

Al and Nige, magnificent beta-readers and damned fine fellows;
Mariah, for cheering/egging me on, and for never giving up;
Patch, for random letter placement;
Andrea, ever my literary champion;
The DRitC team, without whom these stories would not be possible.

Finally, a huge thank you to Tiffany, for a truly wonderful prompt. Here is your story.

Song lyrics from ‘After the Ball is Over’, by Charles K. Harris (public domain).

They went with songs to the battle, they were young.
Straight of limb, true of eye, steady and aglow.
They were staunch to the end against odds uncounted,
They fell with their faces to the foe.

They shall grow not old, as we that are left grow old:
Age shall not weary them, nor the years condemn.
At the going down of the sun and in the morning,
We will remember them.

Author’s Note
Whilst the characters and settings in this story are fictional, the social and political events are real. The language used is, as far as it is possible to discern, that of the time period in which the story is set. A glossary of military terminology is included at the end of the story.