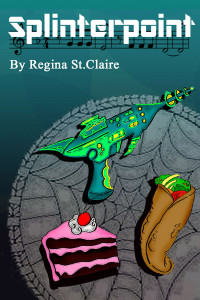 PHOTO DESCRIPTION:
Two well-built, dark-haired men face each other in a small bathroom, their lower halves nearly touching. The shorter one has his back to the mirror, a disheveled look to his business-casual clothes. The taller one has shorter hair and no shirt at all. Both have shaving foam on their faces. The shorter man drags a razor over the taller one’s cheek. A second razor glides across his own face, guided by no visible hand.

Of all the shabby hotels in the city, my biggest competition, the most arrogant asshole in the world, was staying in the room next door, playing his TV loud enough for me to hear Judge Judy’s verdict, and each time he leaves to use the ONE bathroom on this entire floor that we all have to share, he drums his fingers across MY door.

He’s waiting for me to make my move, I know it. But he’s not going to steal my target AGAIN. Or… anything else… again. I know how to deal with Mr. Does-jobs-while-shirtless. Like, seriously, we get it. You work out!

I thought dealing with him was bad enough. Finding an international convention of assassins nesting downstairs in the lobby? Or catching my (very) ex-mentor (ex-everything…) skulking in the shady bar next door? I don’t know what’s going on, but suddenly this job is looking a little too popular, and now when I hear those assured fingers tap across my door, it doesn’t feel like so much a threat anymore.

At least not the biggest threat today…

Have fun, and thank you!

Acknowledgements
I’d like to thank my beta, A.L. Boyd, and my editor, Raevyn, who both had a lot more patience with me than I would in their place, and without whom this story would have a lot more issues with it. The entire MMR team that put this event together are my heroes. Thanks for the opportunity, guys.

This story is for Alison and Ben, who were both remarkably supportive of my plot-related ramblings and tolerant of my occasional meltdowns. You two kept me sane, or at least as sane as I was when I started out.